Thanks to its excellent location in the historic centre of Rome, Hotel Astoria Garden allows you to discover all the secrets of the Eternal City walking comfortably afoot. Hotel Astoria Garden staff, always cordial and attentive, will be happy to give you all tourist information necessary to make the most of your stay in Rome. 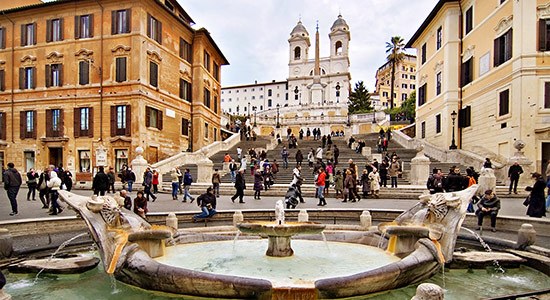 The Spanish Steps are a set of steps, climbing a steep slope between the Piazza di Spagna at the base and Piazza Trinità: dei Monti, dominated by Trinità dei Monti. The Scalinata is the longest and widest staircase in all Europe: the monumental stairway consists of 138 steps. 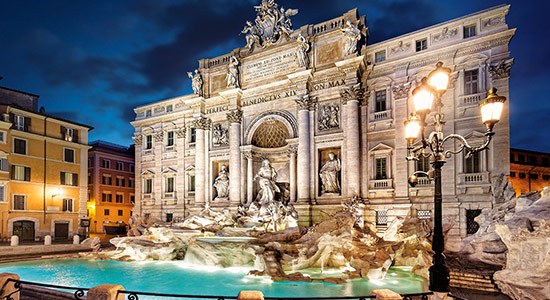 The Trevi Fountain is largest Baroque fountain in the city. A reported current version of this legend is that it is lucky to throw three coins with one's right hand over one's left shoulder into the Trevi Fountain. The money has been used to subsidize a supermarket for Rome's needy. However, there are regular attempts to steal coins from the fountain. 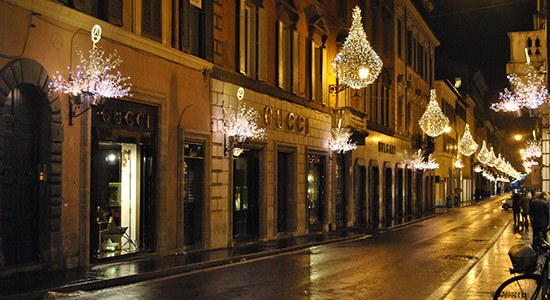 Via Condotti is a center of fashion shopping in Rome, dating back to the atelier of Bulgari which opened in 1905. Now, in addition to Valentino, other designers such as Armani, Hermès, Cartier, Louis Vuitton, Fendi, Gucci, Prada, Chanel, Dolce & Gabbana and Salvatore Ferragamo all have stores on Via Condotti. 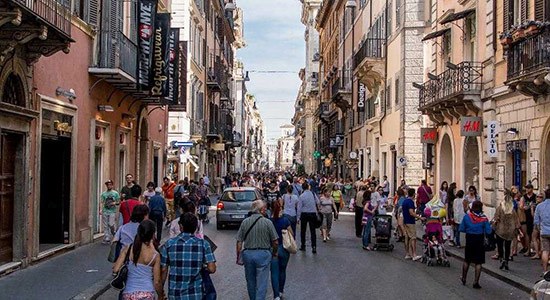 Via del Corso, called "il Corso", is the commercial and political center of Rome. Along its 1500 meters there are churches, ancient noble buildings and monuments, such as Piazza Colonna, the Galleria Alberto Sordi (formerly Galleria Colonna) and the sixteenth-century Palazzo Chigi. Via del Corso joins Piazza Venezia to Piazza del Popolo and, together with via di Ripetta and via del Babuino, composes the so-called "trident", the heart of renaissance and baroque Rome. 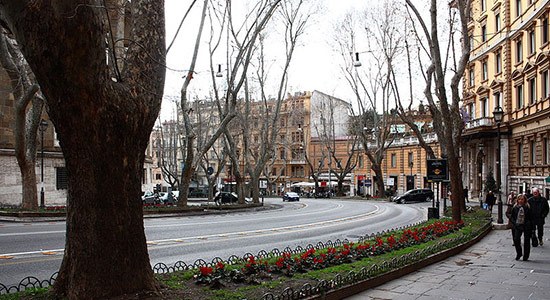 Federico Fellini's classic 1960 film La Dolce Vita was mostly centered around the Via Veneto area. This made the street famous in the 1960s and '70s and turned it into a center for upscale cafes and shops. Following a period of stagnation in the 1980's the street has now found a new life. 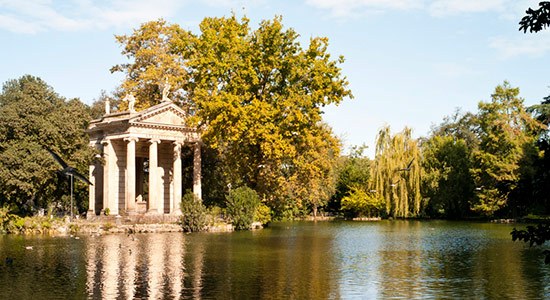 The Villa Borghese is an extensive park with lots of green, small lagoons and lots of fountains. The park is planted with the typically Roman umbrella pines and makes a beautiful shady escape from the city's summer heat. Within the park, there are a zoo, replicas of ancient temples, art galleries and museums, in addition to a number of statues of famous characters. The Galleria Borghese houses several paintings, sculptures and antiquities belonging to Bernini, Caravaggio, Canova, Correggio, Rubens and many more. The park extends from Piazza del Popolo to Via Veneto and further out. 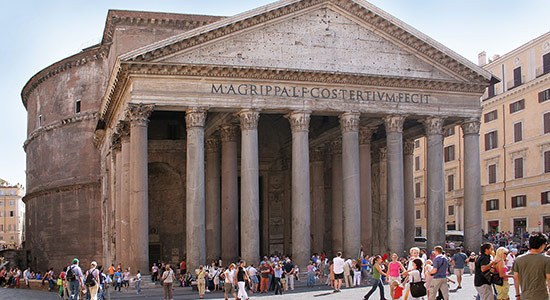 Of all Rome's ancient great buildings, only the Pantheon remains intact. It was origninally built by Marcus Agrippa as a temple to all the gods of Ancient Rome. Where it stands was not chosen by chance, but is a legendary place in the city's history. According to Roman legend, it is the place where the founder of Rome, Romulus, at his death was seized by an eagle and taken off into the skies with the Gods. The Pantheon contains the tombs of Rafael and of several Italian Kings. The dome gets thinner as it approaches the oculus, the hole in the top of the dome used as a light source for the interior. Rain can occasionally fall through it, but the floor is slanted and drains cleverly, removing the water if it manages to hit the floor. 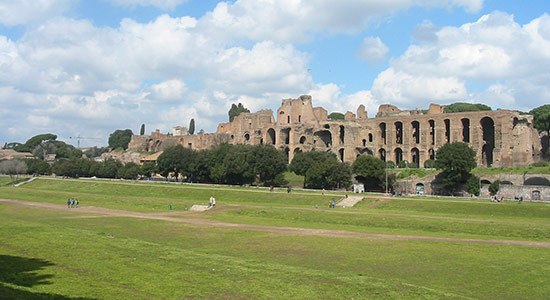 The Circus Maximus lies between the Palatine and Aventine Hills. The Circus Maximus could hold over 250,000 people and chariot racing was the most important event at the Circus. It is thought that the rape of the Sabine women occurred here. While the men watched the races, their unmarried women were abducted by the Romans to be their wives. 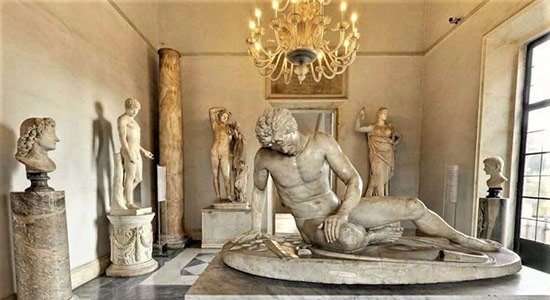 The Capitoline Museums are actually a group three palazzi surrounding Michelangelo's Piazza del Campidoglio. The history of the museums can be traced to 1471, when Pope Sixtus IV donated a collection of important ancient bronzes to the people of Rome and located them on Capitoline Hill. The famous bronze she-wolf nursing Romulus and Remus, which has become the emblem of Rome is housed here. Other important masterpieces include the original equestrain statue of Marcus Aurelius, and the marble statue of the "Dying Gaul". 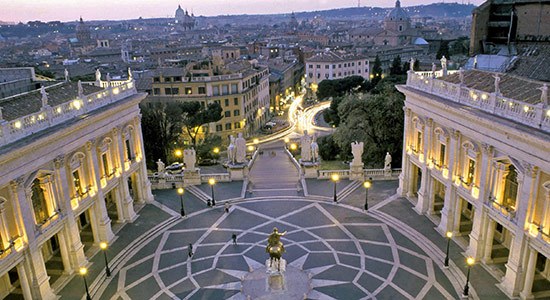 A must for every visitor. A broad flight of steps (the Cordonata) leads up to Michelangelo's spectacular Piazza del Campidoglio. This is flanked by the Palazzo Nuovo and Palazzo dei Conservatori, housing the Capitoline Museum with their fine collections of sculptures and paintings. Michelangelo came up with an original design for the square, including an intriguing ground pattern. At the center of the square is a replica of an equestrian statue of Marcus Aurelius. 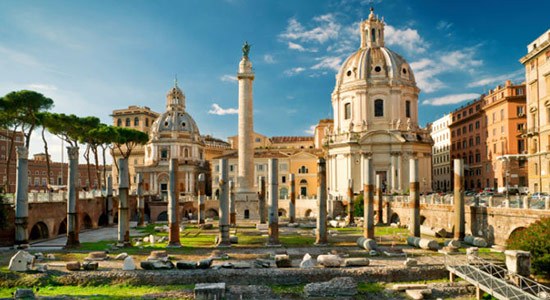 The Imperial Fora consist of a series of monumental fora (public squares), constructed in Rome over a period of one and half centuries, between 46 BC and 113 AD. The forums were the heart of the late Roman Republic and of the Roman Empire. 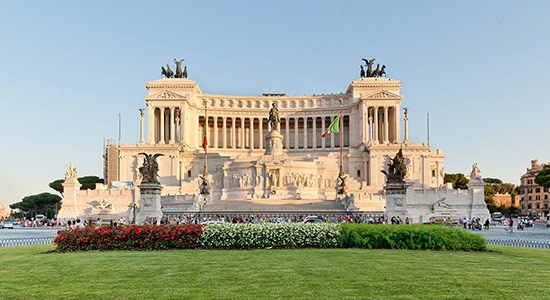 It is impossibile to miss the Vittoriano (Altar to the Nation). This enourmous monument at Piazza Venezia in pure white marble, was built as a tribute to the king Victor Emanuel II. It has be given a number of nicknames, from a typewriter to a wedding cake. An eternal flame burns at the Tomb of the Unknown Soldier. The monument is nevertheless well worth the visit for the great views from the top, its majestic stairways and Corinthian columns. 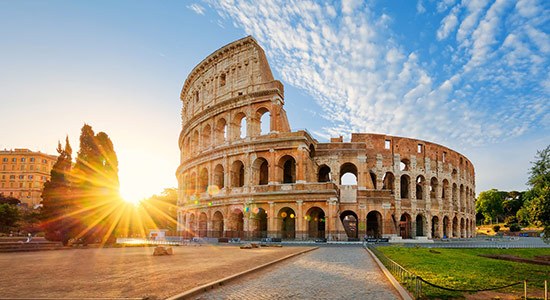 The Colosseum, originally the Flavian Amphitheatre, is an elliptical amphitheatre, the largest ever built in the Roman Empire. It is one of the greatest works of Roman architecture and Roman engineering. Originally capable of seating around 50,000 spectators, the Colosseum was used for gladiatorial contests and public spectacles. 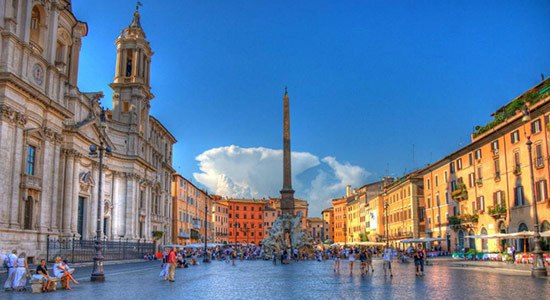 Few are aware that the Stadium of Domitian lies underneath Piazza Navona. Great chariot races were once held here. It is also one of the most beautiful baroque sites in all Rome, unspoiled by traffic. Bernini's Fountain of the Four Rivers in the center is another baroque masterpiece - symbolizing the world's greatest rivers. Among other monuments of importance at Piazza Navona worth seeing - the twin towered facade of the 17th century church of Santa Agnes, the Fountain of the Moor, Palazzo Braschi and the Church of Our Lady of the Sacred Heart. In December, Piazza Navona livens up to becomes a huge Christmas market with stands selling nativity figures, candies, treats and toys. 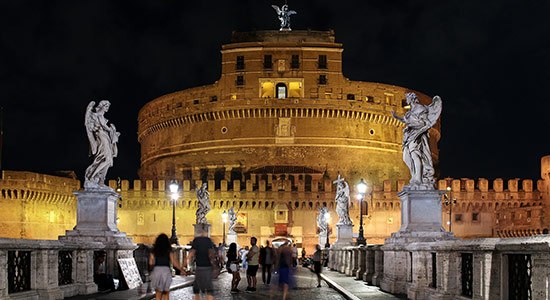 With its unusual cylindrical contour and particularly scenic position on the shore of the Tiber River, Castel Sant'Angelo is one of the town's most famous landmarks. It was originally built in the second century as a tomb for Emperor Hadrian and then used as a fortress in the Middle Ages. The Papal state also used Sant'Angelo as a prison; opera lovers will remember Tosca leaping to her death from this Castle. A secret corridor also connects the Castle with the Vatican. Today it is home to the National Museum of Castel Sant'Angelo. 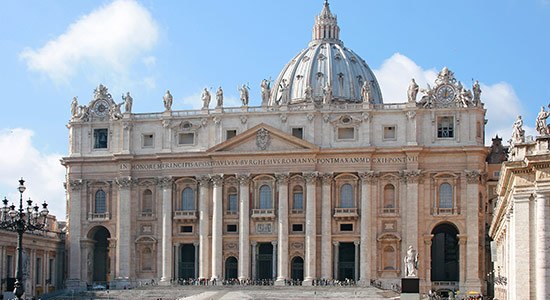 St Peter's Basilica in itself is truly impressive as it is the largest church in the world. St Peter's Dome is also the tallest dome in the world, built according to Michelangelo's drawings. The Dome is both the symbol of St Peters and of Rome. It can be seen at the distance from large parts of the city, perfectly in perspective, framed by the tops of trees, often wrapped in a thin mist, yet its always there. The Romans affectionately refer to the Dome as the "Cuppolone". To visit the Dome, take the elevator to the bottom of the dome where a small, long and mostly spiral staircase brings you to the top of the dome. From there you have a magnificent view of Rome and of the Saint Peter's square in particular. 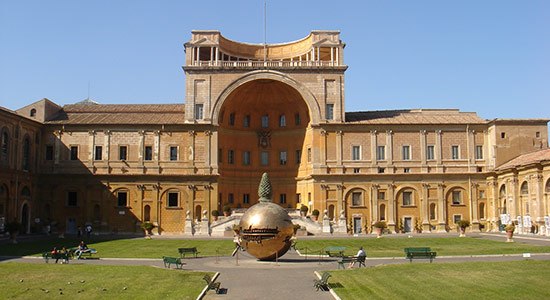 There are priceless works of art here, collected by the popes or often expressly commissioned by them. Forget about seeing everything in a single visit: it simply cannot be done. The Papal Museums and Galleries stretch over four miles. The Pinacoteca (Picture Gallery) has 17 rooms with many famous paintings belonging to Leonardo da Vinci, Caravaggio, Raffaello and Tiziano. The Borgia Apartments, the Raphael Rooms, Gallery of the Tapestries and the Sistine Chapel with Michelangelo's "The Last Judgement" are well worth a visit.

With wonderful pictures of our rooms, breakfast room, Hall & Rome

FROM THE ROMA TERMINI STATION

FROM THE SQUARE OF THE REPUBLIC
Contact Us Now